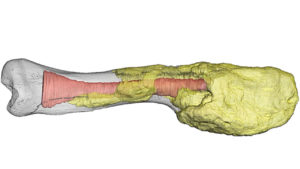 Rockwatchers interested in the fields of geology and medicine may be intrigued to read a post written by Gretchen Vogel of Science magazine that reports on some fascinating findings recently published in The Lancet Oncology confirming a bone cancer diagnosis in a dinosaur.

The dinosaur bone belonged to a Centrosaurus, which was a horned, plant-eating dinosaur. This particular dinosaur, discovered in Alberta in Canada, lived around 76 million years ago.

Vogel reports that using advanced modern day techniques, scientists from medical and geological fields have found the dinosaur’s leg bone had a type of cancer called an osteosarcoma, which also occurs in leg bones of teens and young adult humans.

The research is significant because, for the first time it confirms a dinosaur cancer diagnosis within the cells of the species.

It’s exciting to wonder what future discoveries might be made by looking at fossils using modern day research methods and technologies!