Britain has lots of pebble beaches. What happens to these huge collections of shingle when they turn into rock? SUSANNA VAN ROSE explains by using a fruit and nut cake you can make at home.

What is a conglomerate?

A real, proper conglomerate should be made of rounded pebbles, some of which touch each other. In between the pebbles is fine-grained material, often sandy in texture, which holds everything together. Because it looks kind of like a pudding, an old-fashioned name, puddingstone, is sometimes still used. A similar rock is breccia, but in breccia, the rocky fragments have sharp, defined edges – they are angular.

Some conglomerates or breccias are matrix-supported – this would be like an ordinary fruit cake or a currant bun with lots of cakey stuff holding everything up, and a few currants scattered. In a matrix-supported cake you do have to worry about the fruit pieces all sinking to the bottom. But if they do, all is not lost, geologically speaking, because there are some rocks just like that. 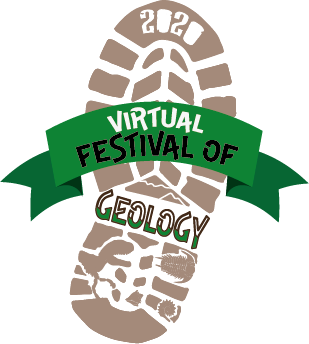 Featured as part of the Virtual Festival of Geology 2020 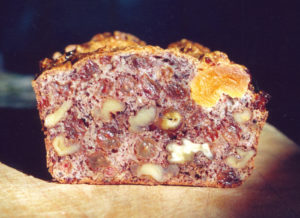 A cross-section (slice) of the finished cake. Yum! by Susanna van Rose 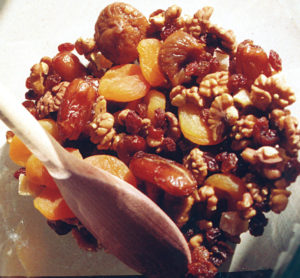 The fruit and nut version of pebbles 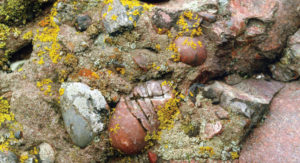 To make a conglomerate cake, the bigger and rounder the chunks are, the better it will be, so don’t cut them up. For a breccia cake, cut or tear up the bigger ones a bit. Either way, they won’t fall to the bottom during cooking, because they’re already going to be sitting on the bottom. Now’s the time to make that delicious cake!
Always make sure you have a responsible adult with you to help you prepare and cut your cake
IngredientsMethod

To make a puddingstone, conglomerate or breccia cake, here is a seriously easy recipe that you can make for a special occasion:

* You can use any combination of fruit and nuts you like. Whole dried figs, dates, apricots, cherries, walnuts, brazil nuts, pineapple chunks, whatever you have in the store cupboard, this cake is great for using up any (unsalted) fruit and nuts.
** Make sure you are not allergic to them!

Now see below to tuck in and recognise the geology you have created.