The Earth’s a Pizza Recipe

Sent in by Rockwatcher, Benedict Douglas

One day, when I sliced up a pizza for my dinner, I saw the inner workings of the Earth! Don’t believe me? Make a ‘Pizza Earth’ for yourself – then gobble it up afterwards! Follow these steps carefully – with an adult to help – to make a truly terrific terrestrial treat! See the Ingredients and Method below to find out how… 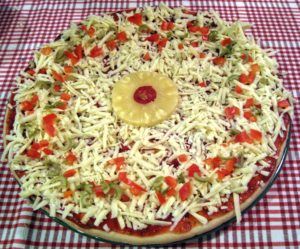 Always make sure you have a responsible adult with you when making these recipes
Start by biting off the very tip of the pizza (this should be either the cherry tomato or a piece of pepperoni). Imagine deep down, over 6400m down in fact, where you will find a massive solid blob over 1200 km wide, of the heavy metal iron. Your tomato is the inner core and is the very centre of the Earth!
Take another bite – either the pineapple or the salami. Shut your eyes and imagine a layer of liquid iron, 2550 km thick, swishing around the inner core. Iron has to be over 1500°C to melt, so thank your lucky stars your pizza is considerably cooler! This molten metal makes up the outer core and its movement around the inner core creates the Earth’s magnetic field. How cool is that?
Now you are on to the cheesy bit, which is called the mantle and is about 2800 km thick. It is made of very hot and very heavy rocks that are very peculiar. Although they are solid they can move, very slowly, like a liquid. It’s a bit like your melted cheese just before it cools down completely – it is no longer runny, but it can stretch and flow like a liquid.
Before you move up to the crust you might find a topping. The olive and the pepper represent two of the many minerals that you find under the crust: olivine (that’s your olives) and pyroxene (P for pepper, P for pyroxene).
Olivine is usually a lovely green colour, like the olive on your pizza. Over 50% of the upper part of the mantle is made of olivine, which can be found around volcano rocks on the surface. This is because it can be carried up to the surface from deep inside the Earth by rising magma, which then spurts out onto the surface. When it does this, the lovely green olivine can become a very pretty gemstone! Pyroxenes are more varied but almost as common. There are many types, all being different in colour (but mainly either browny or greeny) and they mostly occur either with olivine or in other igneous rocks.
The pizza mushrooms are not minerals. They are mantle plumes. A mantle plume is hotter than the rest of the mantle and is very often mushroom shaped. It melts the rocks above it and turns them into magma which can shoot out of a volcano as lava! So you very often find volcanoes above mantle plumes, like on Hawaii or Iceland.
Finally, you can eat the crust. If you did it right, you  shouldn’t have much crust. This is because the Earth’s crust is also a very thin layer on the outer edge of the planet. The crust of the Earth can range from 5–40 km thick, but either way it’s not very thick compared to the insides of the Earth (a bit like the thickness of apple skin compared to the rest of the apple). 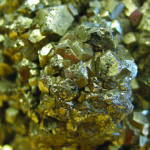 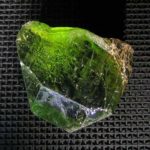 Now see below to tuck in and recognise the geology you have created.
IngredientsMethod

One ready made pizza base
Passata or a jar of Tomato pasta sauce
Any cheese, grated (I used Cheddar – yum!)
Dried oregano
A pineapple slice and a cherry tomato or both a piece of salami and a piece of pepperoni (one has to be bigger than the other)

Once it is out of the oven and cooled a bit, cut a big slice and put it on your plate. Then imagine the world beneath your feet as you eat it!