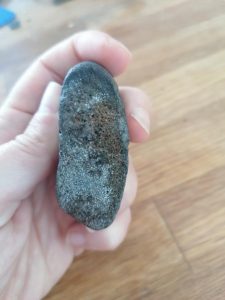 Famed for its huge dinosaur footprints at low tide, Compton Beach on the Isle of Wight is something of a fossil hunter’s pilgrimage seeing thousands of amateur and professional geologists every year.

So, it’s perhaps not surprising that Rockwatcher Freya, who was holidaying with her family, found a dinosaur bone fossil on her recent visit given that the Isle of Wight – or Dinosaur Island as it’s become affectionately known – is home to one of the richest sources of dinosaur remains in Europe.

The geology of the island dates back to the Early Cretaceous period which was around 125 million years ago when the environment was largely made up of ponds, rivers and swamps – conditions well suited to forming fossils. More than 20 dinosaur species have been found on the Isle of Wight including Iguanodons which are part of the bird-footed bipedal herbivore suborder called Ornithopoda.

Although commonly spotted at low tide when the sea has washed up new fossil fragments, you still need to know what to look for. How do you know you’ve been lucky enough to find a dinosaur fossil? Rockwatch ambassador Michael Oates, says that dinosaur bone fossils are commonly black and shiny with a honeycomb texture and Freya’s fossil find certainly fits that description.

Fossil hunters will tell you that it’s the biggest thrill to discover something so old and rare that links you to a by-gone era. And it has certainly captured Freya’s fascination and interest hearing more about her fabulous find. In fact, Freya, her sister Elsie and mum and dad are all on the hunt for other interesting finds and enjoying learning about geology together. They have since enjoyed trips to Lyme Regis and East Wittering where they found some rocks with crystal formations.

If you’re lucky enough to find a dinosaur bone fossil why not get in touch and find out more about it? But remember to fossil hunt responsibly and follow the fieldwork code to stay safe and respect the environment.

You can find out more about Freya’s dinosaur bone discovery at Compton Bay here.

Or you can send us details about your own fossil find to discover more about it.