Thomas is 11 and lives in Lancashire. He sent photos of these two objects and wanted to find out more about them. This is what Rockwatch Ambassador Michael thinks Thomas has found. 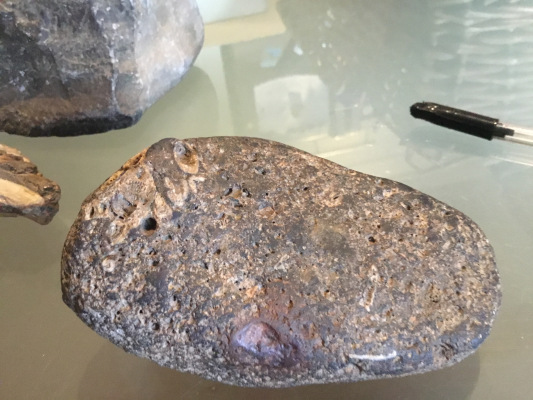 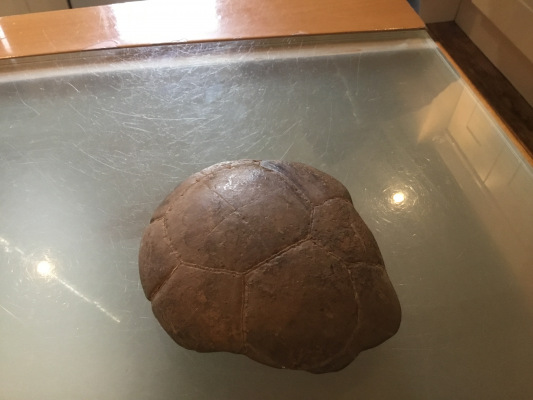 Thanks for sending me the two photographs. I can tell you about both of them: The brown pebble-like object is not actually a fossil, but is called a Septarian Concretion (or Nodule). These formed when a patch of lime concentrated around something in a mudstone sediment (often a shell) a short distance below the seafloor, during the time of deposition of the sediment. These concretions shrank internally as they hardened and small cracks formed in their interior. These filled with mineral, which in your case looks like calcite (lime). You have a very good example of a small but complete one of one of these concretions which has been slightly abraded to reveal the inner structure. Because of the way they formed, it is not unusual for a decent, uncompressed fossil to be found inside them. though it may have a “crazy paving” appearance due to the changes that occurred in the concretion as it became more indurated. The brown colouration is probably due to an iron compound, such as Iron Carbonate (Siderite) Because of their superficial resemblance, they are sometimes called Turtle Stones.

The larger pebble is probably Carboniferous Limestone, containing the disaggregated remnants of a crinoid (sea-lily). These abounded at times in the Early Carboniferous seas, some 330-350 million years ago. Although informally called “lilies”, they are actually echinoderms – related to sea urchins and starfish but were a cylindrical stem anchored to the sea floor by a holdfast which fed by waving its feathery pinnules (on top) in the sea water to catch and filter out any microscopic food particles. Look again and you’ll probably start seeing all sorts of fossils in rocks derived from the same limestone in your area.

You can find good illustrations of all these online with a simple search. I shall be pleased to send an opinion on any more from your collection. It is how I started at about the same age and nearly 60 years later I have a massive amount of material collected from all over the world. A tip for photos is to include a scale (a ruler will be ideal) and for most, 2 or 3 shots from different angles. I look forward to hearing from you and maybe meeting on one of our Rockwatch trips in Northern England once the lockdown is over. Keep up the good work.

Dear Mr Oates , thank you for replying so quickly, thanks for explaining about my finds. I found it very interesting and I now see from looking closer that it’s a sea lilies fossil . I look forward to meeting you one day on a field trip. I am fascinated about how old my turtle stone is, it’s amazing. From Thomas
Aria is 7 and is a budding geologist in Buckinghamshire and found this fossil whilst out litter picking one day. Rockwatch Ambassador Michael explains what Aria has found. 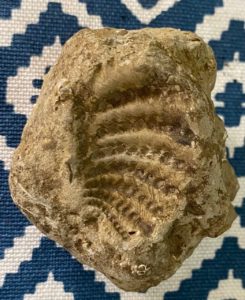 I can confirm that what you have found is a fossil of a Trigoniid bivalve, quite possibly Laevetrigonia gibbosa, although there is another, more elongate variety of the genus called Myophorella, which is a little larger, more elongate and has a slightly stronger ornamentation. Without seeing the outline of the complete shell, I’d not be confident enough to suggest which it is. Modern relatives of this bivalve still thrive in the Sea of Japan. Try impressing a piece of plasticine into your fossil to get a better idea of its original appearance.

As for its age…I expect you already know it originates from the Portland Limestone, which underlies a lot of Haddenham. I used to dig up a lot of fossils of exactly the same age in my old school garden in Walton Street, Aylesbury, nearly 60 years ago. This means that your bivalve was alive some 145 million years ago, when what is now Britain enjoyed a much warmer climate than today.

If you have any further fossil enquiries, please do send them.

Wow, how wonderful! Thank you for taking the time to tell us more about our first fossil find. It’s hard to imagine as far back as 140 million years and that where we are now was once underwater and full of marine life! You have definitely sparked our interest and we will be out hunting for more fossils and enrolling in Rockwatch over the Easter holidays!
Cecil is 7 and he and his brother recently found this on a trip across the Leicester branch of the Grand Union Canal, near Watford. Cecil sent in some photos and checked a fossil guide and thinks they found a coprolite. Rockwatch Ambassador, Michael shared his thoughts with Cecil. 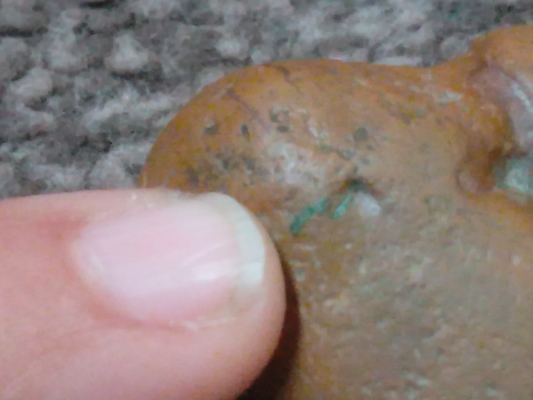 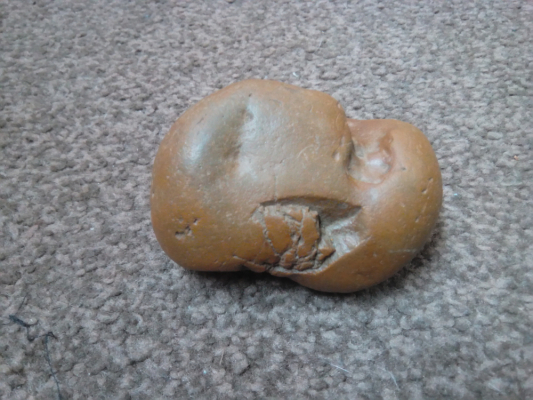 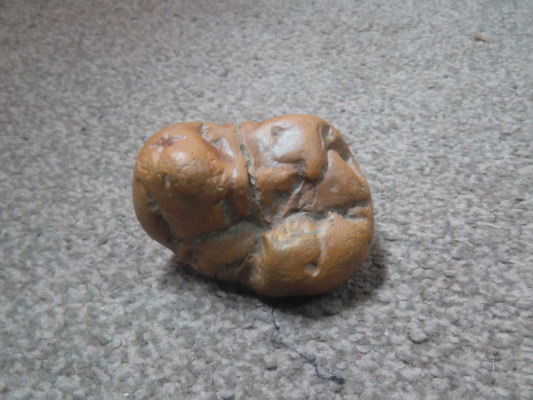 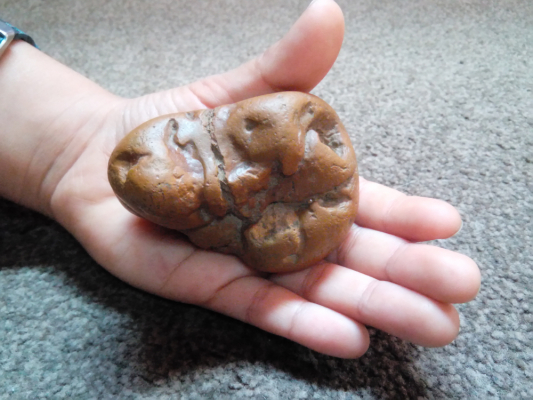 That’s quite an unusual rock you have found. Unfortunately (or maybe not) I don’t think it is a coprolite. The Watford you refer to is, I assume, the one in Northamptonshire, near the M1 motorway. Much of this area has as its underlying bedrock a unit called the Dyrham Formation and the overlying Marlstone Rock. These date back to the early Jurassic (some 183 million years ago) when they were deposited as mud on the floor of the Jurassic sea. There is a lot of iron in these sediments and the Marlstone was actually dug for iron ore around Banbury until fairly recent times. Some of the iron came out of solution and aggregated as lumps (or nodules) of the mineral iron carbonate (siderite) just below the sea floor. I believe that your discovery may be one of these. I found a picture of something similar, in rocks of about the same age, on the Yorkshire coast 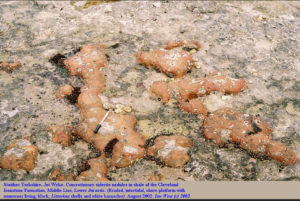 The other possibility is that it is a piece of ‘’Liver Quartzite’’, a brown, really hard cemented sandstone which is abundant as pebbles in 250 million year old Triassic age desert sediments and would have been transported to Watford from the NW by a moving glacier during the Ice Age (about 450,000 years ago.  If it can scratch a piece of glass, then it is Liver Quartzite.

That’s the best explanation I can offer without handling the rock myself, although your photos were very well-taken and clear.

Keep looking and you should find plenty of fossils in these Jurassic rocks.