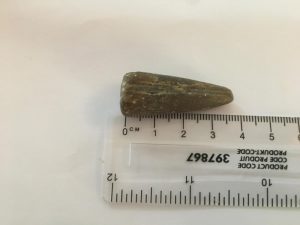 Often found digging in the gravel at home, Rockwatcher Katie has discovered that her fabulous find is a Belemnite, a bullet-shaped part of an extinct squid that thrived in our ancient seas.

So, what’s a Belemnite?

Belemnites were an extinct marine animal that looked very like a modern-day squid except that they also had an internal skeleton. It’s the tail end of this skeleton which is bullet-shaped that is often found by fossil hunters. Its real name is a rostrum or guard. They were called ‘’Thunderbolts’’ by some country folk in the past, supposed to have appeared like darts from the heavens during thunder storms. They were also considered to possess magical curative properties for people and horses in folklore.

Geologists know that this ancient sea predator lived in the Jurassic and Cretaceous periods between 200 and 65 million years ago. Its success with survival for so long is believed to relate to its maneuverability and speed. It was fast because of its streamlined shape, fins and ability to propel itself at great speed.

In the UK, Belemnite fossils are often found in Jurassic clay formations particularly from the East of England coast at Whitby down to the Jurassic coastline at Charmouth where one of the clay layers is actually called Belemnite Marls. They are also frequent discoveries in Cretaceous rocks, particularly the Gault Clay and the higher levels of the Chalk.

Belemnite fossils are occasionally found clustered together in large masses, which are referred to as ‘Belemnite Battlefields’. Research has pointed to these being either mass mortalities after mating or huge pellets regurgitated by their principal enemy, Ichthyosaurs (like owl pellets). So, depending on where her gravel came from, it’s possible that Katie may find other Belemnites if she keeps digging in her gravel at home!