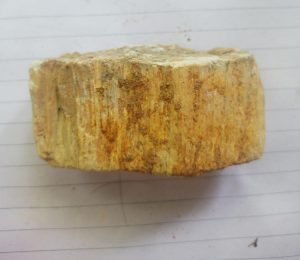 This week’s fabulous find was discovered by young geology enthusiast Michele from iconic Lulworth Cove in Dorset on the Jurassic Coastline. Sending in details about her specimen for further investigation, Michele wondered if her rock might be fossilised wood, grass or plant matter.

Rockwatch Ambassador Michael explains that clues to its form lie in its fibrous appearance as well as its location. Resembling the fibrous texture of beef, Michael says the rock is almost certainly part of the Upper Purbeck formation of the area. And whilst Michele’s rock looks a bit like the texture of fossilised wood, it is in fact a mass of Calcite crystals which meshed together when they were formed millions of years ago.