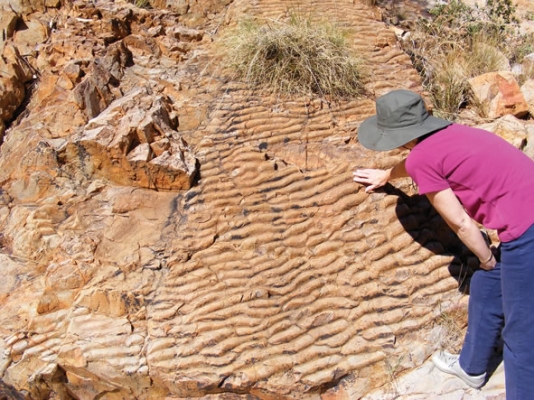 Rockwatch so busy on the road
Some of the highlights of Rockwatch events around the country to share with you.

A fantastic Rockstar double!
See our annual competition winners. This year for the first time, we awarded two Rockstars, such was the high quality of entries.

Peter Doyle shares his love of the American West with readers on his recent visit to Utah. This is the State of stunning National Parks that has a colourful geological history as well as a, literally, colourful present. The rocks are largely, amazing coloured sandstones eroded into extraordinary formations over millennia.

Learn to be a geodetective with Alan Holiday. He explains how to read clues locked in ripples in sedimentary rocks. He travels from Dorset, to Wales and to Queensland in Australia interpreting sedimentary environments with the help of ripples he found in ancient rocks and on present day beaches.

WHAT CAUSED THE NZ QUAKE?

The September earthquake in New Zealand, some 40 km west of Christchurch, occurred on an unknown geological fault. Philip Andrews, a geologist who lives in New Zealand, explains more about the quake on this extremely geologically active country.

Geology often brings up surprises and Kate McIntyre and John Howe do just that in their new interpretation showing the extent of the last ice sheet to cover Scotland using data they collected from the landscape of the sea floor!

Alan Holiday tells how, after years of unsuccessfully hunting trilobites in this country, his recent travels to Australia led him to find some extraordinarily splendid specimens in Queensland. If at first you don’t succeed…!

THE MAGIC OF JADE

Jade, a metamorphic mineral occurs in two forms, jadeite and nephrite. Ian Mercer tells us more about these highly treasured materials, including their long history, usage and sources. They have both been fashionable since prehistoric times and are much prized in jewellery and as precious ornaments.

Think carefully before buying a cliff-top house! Roger Le Voir explains why, after a visit to Sidmouth cliffs, part of the East Devon and Dorset World Heritage Jurassic Coast.