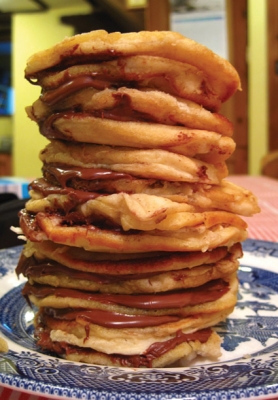 COOK UP SOME PANCAKE ROCKS

Special days out with Rockwatch
Some of our amazing field trips are highlighted in this section, along with school visits.

From the research ship RRS James Cook, Cathy Cole and colleagues discover some startling things about life in the deep, dark Antarctic Ocean. Discover how cold sea water can reach temperatures of up to 4000C in the ocean crust before it bursts out into the sea, forming huge “black smokers” on the sea bed.

COOK UP SOME PANCAKE ROCKS

Try Kate Salmon’s yummy recipe for making your own replica Punakaiki pancakes! Kate explains how these pancake rocks formed in New Zealand some 33 million years ago.

Sometimes it’s not possible to remove fossils from their site of origin, so rubber moulds have to be made which can then be used to cast accurate replicas of the fossil. These can then be studied in the laboratory. Seabury Salmon follows geologists on recent trips to see how it’s done and explains where you might see some amazing replicas in museums around the country.

Susanna van Rose, shares with us the magic of playing with words and how bizarre associations of words can lead to some amazingly creative thinking. Susanna explains how she got a Christmas card with a sea-floor spreading marmalade label in it from a friend who’d illustrated a book she’d written many years ago.

Follow Freya Carter, Rockstar winner in 2010 and 2011, on her recent holiday to Charmouth. Her fossil collecting did not always go as smoothly as she hoped, but she did manage to find some rather splendid fossils and learnt much about collecting in the process!

Ian Mercer shares his enthusiasm for the wonderful crystal structures that he knows so well. He explains how we can use patterns we see in the world about us to help us understand the highly ordered internal structure of crystals.

The Isle of Bute in Scotland was the unexpected place where Elsa Henderson discovered bits of fossil wood on the beach near her home. This surprising find (non had been found here before) led her to discover more about the fossil and the ancient environment where it lived, as she explained to Hannah Falcon-Lang.