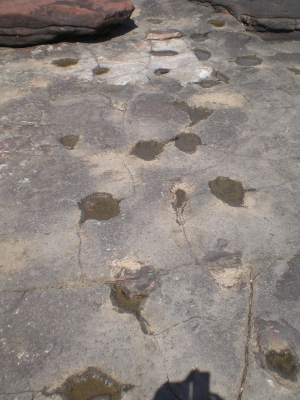 Steve Howe shares his fascinating geological insights into The Bendricks, where Lily Wilder recently hit national news with her dinosaur footprint fossil find, as featured on the BBC website.

The coast between Cardiff and Barry exposes a wonderful succession of 220-200 million year old Upper Triassic rocks.  Around Penarth and Lavernock, just to the west of Cardiff, these Triassic rocks were initially laid down in a large freshwater lake. This was gradually inundated by the sea so that the deposits become increasingly marine as you go up through the succession and pass into the overlying Blue Lias (Jurassic).  Many of these rocks can be very fossiliferous as we have found on Rockwatch trips along this stretch of coast.

However, a little further west, between Sully and Barry, the same aged Upper Triassic rocks are very different.  Here they consist of a series of generally red and buff-coloured siltstones, mudstones with greyer coloured sandstones and conglomerates.  These were laid down on a desert floor close to the edge of the large lake/sea.  Inland, across what is today the Vale of Glamorgan and the coalfield, the land rose up into a series of ancient hills and mountains from which a series of wadis led down onto the desert floor. Although the climate was predominantly hot and arid there were torrential downpours from time to time.  The rain falling on the uplands tore down the wadis and at times overtopped the wadi river channels to spread out across the desert floor wetting the ground and forming short-lived shallow lakes (playas).

The desert and uplands were inhabited by a range of reptiles including some of the earliest dinosaurs.  Although very few bones of these have been found in south Wales we know of their existence from their tracks (footprints). Tracks have been found in these Triassic rocks at a number of spots between Sully Island and Barry but the most prolific site is at the Bendricks, between Barry and Sully, which is in fact the richest dinosaur track locality in Wales.

The first footprints found on this stretch of coast was in 1974, when an area of cliff top was uncovered that contained over 150 small, three-toed footprints of a small, bipedal dinosaur plus a few larger ones.  The small ones are called Grallator and were probably made by a dinosaur like Coelophysis.  Many of these tracks showed clear claw marks as well as the shape, and sometimes texture, of the three toes.  This set of tracks was lifted by Amgueddfa Cymru/ National Museum Wales and re-laid in the Evolution of Wales gallery where it can be seen today.  There were a few poorly preserved tracks left in situ when the rock pavement was lifted and we have seen these on Rockwatch trips to the locality.  The latest track to be found that made the news (2021 see???)) is another Grallator track but a very nice one in which the shape and pattern of the skin on the toes is very well preserved.

In 1990 many more tracks were discovered just a little bit further west, this time in clear trackways that extended for some distance across the bedding surfaces.  These are much larger than the Grallator tracks and have been named Pseudotetrasauropus. They were probably made by a prosauropod dinosaur like Plateosaurus.   These trackways enable us to find out a lot more information about how the animals moved and the speed that they were moving as well as the state of the surface the animal was walking over.  On our Rockwatch trips to this site we have measured the size of the individual prints, to get an idea of the size of the animal that made them, and also the pace and gait of the trackway, which with a bit of fancy mathematics you can work out the speed that the animal was moving.

Most of the tracks that have been found to date appear to be of animals walking on two legs (bipedaly).  However, the animals could have been walking on all fours (quadrupedally) but we are only seeing the imprints of the rear feet because these stepped on top of where the front print was, so making it appear that the animal was walking on its hind legs only.  One clear quadrupedal trackway has been found on the surface of a huge block that had fallen out of the cliff where some of the hind prints can be seen to obscure part of those of the front feet.  This block was far too big to move so a cast of the trackway was taken instead, luckily as the original has now sadly eroded away.

Although some of the tracks and trackways have been lifted and taken to the museum for safe keeping the site is an SSSI so on no account should you try and remove any.  Not only would you probably destroy the track in the process but would also remove a lot of potential information about the track maker when left as part of a trackway. The tracks are easiest to see under low angle light so it pays to visit the site early morning or late afternoon or, best of all, during the winter months when the sun is at a low angle.  You do of course also have to get the tide tables correct otherwise you may get wet feet!

The Triassic rocks in this area are very well jointed and during storms the sea is constantly ripping blocks out of the cliffs.  From time to time, some of these expose new footprints so you never know what you may find from one day to the next.  So, if you are in this area keep your eyes open!

Our thanks to Steve Howe for writing this post and sharing his photographs.